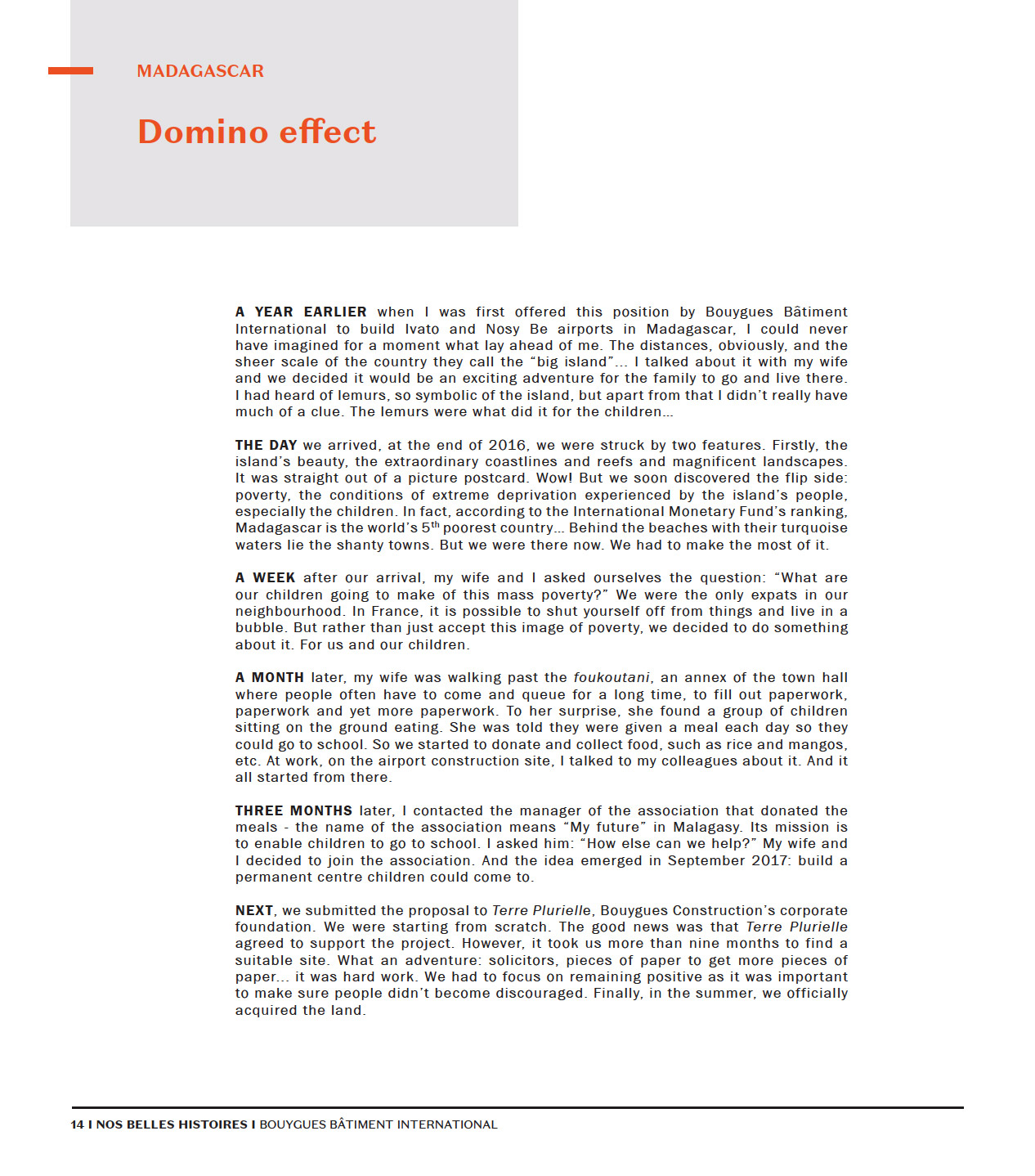 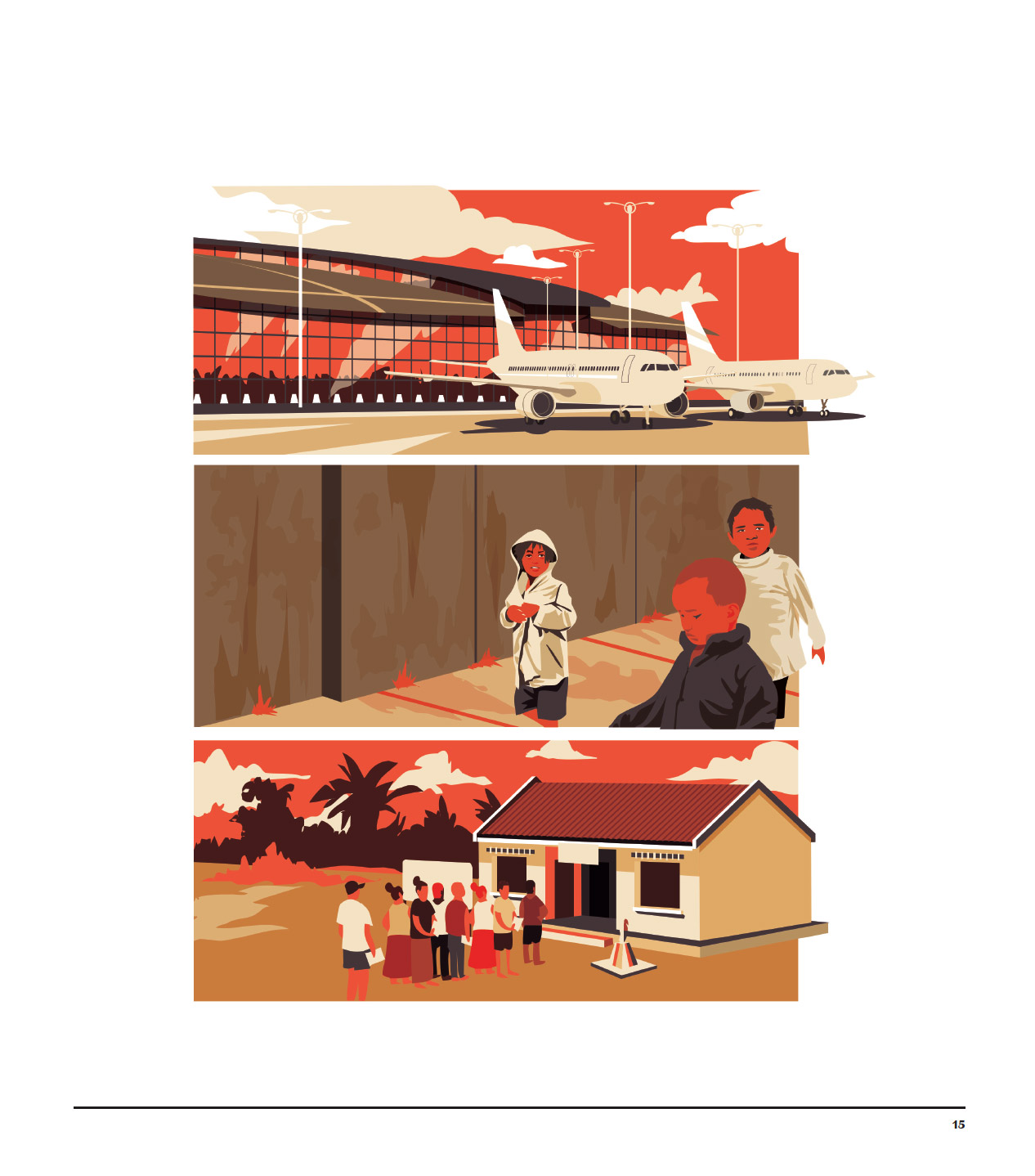 A YEAR EARLIER when I was first offered this position by Bouygues Bâtiment International to build Ivato and Nosy Be airports in Madagascar, I could never have imagined for a moment what lay ahead of me. The distances, obviously, and the sheer scale of the country they call the “big island”… I talked about it with my wife and we decided it would be an exciting adventure for the family to go and live there. I had heard of lemurs, so symbolic of the island, but apart from that I didn’t really have much of a clue. The lemurs were what did it for the children…

THE DAY we arrived, at the end of 2016, we were struck by two features. Firstly, the island’s beauty, the extraordinary coastlines and reefs and magnificent landscapes. It was straight out of a picture postcard. Wow! But we soon discovered the flip side: poverty, the conditions of extreme deprivation experienced by the island’s people, especially the children. In fact, according to the International Monetary Fund’s ranking, Madagascar is the world’s 5th poorest country… Behind the beaches with their turquoise waters lie the shanty towns. But we were there now. We had to make the most of it.

A WEEK after our arrival, my wife and I asked ourselves the question: “What are our children going to make of this mass poverty?” We were the only expats in our neighbourhood. In France, it is possible to shut yourself off from things and live in a bubble. But rather than just accept this image of poverty, we decided to do something about it. For us and our children.

A MONTH later, my wife was walking past the foukoutani, an annex of the town hall where people often have to come and queue for a long time, to fill out paperwork, paperwork and yet more paperwork. To her surprise, she found a group of children sitting on the ground eating. She was told they were given a meal each day so they could go to school. So we started to donate and collect food, such as rice and mangos, etc. At work, on the airport construction site, I talked to my colleagues about it. And it all started from there.

THREE MONTHS later, I contacted the manager of the association that donated the meals – the name of the association means “My future” in Malagasy. Its mission is to enable children to go to school. I asked him: “How else can we help?” My wife and I decided to join the association. And the idea emerged in September 2017: build a permanent centre children could come to.

NEXT, we submitted the proposal to Terre Plurielle, Bouygues Construction’s corporate foundation. We were starting from scratch. The good news was that Terre Plurielle agreed to support the project. However, it took us more than nine months to find a suitable site. What an adventure: solicitors, pieces of paper to get more pieces of paper… it was hard work. We had to focus on remaining positive as it was important to make sure people didn’t become discouraged. Finally, in the summer, we officially acquired the land. 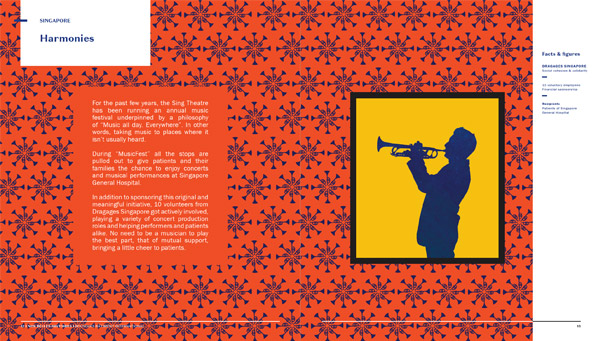 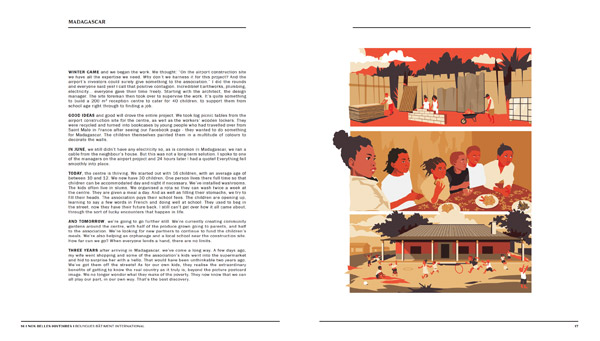